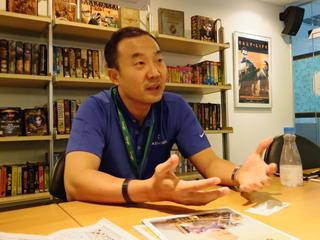 BANGKOK -- Thailand's online game producer Asiasoft is seeking to grab 300 million subscribers in the coming three to five years in Asean countries, more than double the current customer base and about half of the region's entire population. Chief Executive Officer Pramoth Sudjitporn says that mobile games will be the key driver as network infrastructure improves and smartphone users expand.

"It's like Facebook. The bigger the network the bigger the advantage," Pramoth said in a Thursday interview with the Nikkei Asian Review. Asiasoft, listed on the Stock Exchange of Thailand, currently has 120 million registered customers in six countries -- Thailand, Singapore, Malaysia, Vietnam, Indonesia and the Philippines. It is "the only company that has a network across Asia," Pramoth boasts.

Its main business is bringing online games developed outside the Association of Southeast Asian Nations, mainly from South Korea, Taiwan and China, into the region. Creators of original games grant Asiasoft localization and distribution licenses. By teaming up with Asiasoft, creators may gain access to multiple Asean markets at once.

Japanese gaming companies are joining in too. Following the launch of Sega's "Phantasy Star Online 2" this month, Pramoth revealed the company has agreed to roll out Sony Online Entertainment's "DC Universe" next month and Capcom's "Onimusha" by the end of the year. "Japanese companies had been more focused on games for consoles but they are increasingly turning to online games," according to Pramoth.

Among the new Japanese titles, Capcom's Onimusha will come in both computer and mobile versions. Games nowadays are played on various hardware, but Asiasoft's business has so far been centered on computers. Pramoth says this was because "first generation mobile games had been too simple." He acknowledge that it is time to make a full-fledged move into smartphone software as "mobile games are getting more complex and commercialized." Loyal players tend to spend more time with the game and are much more willing to pay subscriptions, he added.

For Asean gamers, playing online had been cheaper and faster on the computer, often in cyber cafes, over the past decade. But the establishment of high-speed networks, including in Thailand, where 3G mobile service was introduced last year, has made Pramoth certain that gaming on mobile devices will go mainstream. People's tendency to jump to new items will certainly help the migration, he says. "The screen is the same anyway. It hasn't changed since the first generation computer games of more than 20 years ago."